Chris Burtish is an individual that has just completed one of the most incredible trips of a lifetime. On a modified paddleboard, he was able to travel across the Atlantic Ocean. He started from Morocco and ended up all the way to Antigua. It took him 93 days. During that time, he would paddle as much is 15 hours a day, going a distance of over 4000 miles. To imagine that an individual could do this without encountering dangerous situations such as shark attacks, or rogue waves, clearly, shows that it is possible. He is an avid surfer, having one a contest years before, so he is no stranger to waves and the water.

This is an acronym for standup paddle boarding. This is where you will see people with oars, standing on the water, paddling along. It takes a great deal of balance, and most of these are very small, similar to a regular surfboard. However, to make a journey that would take you out over the Atlantic Ocean, this would require something a little larger. Not only would it need to be more aerodynamic, but there should be a place where you could actually sleep and not be affected by creatures in the water, or by incredible waves that could knock you over. These are obstacles that were part of the design of the paddleboard that he was able to use. It is for that reason he was able to be as safe as possible traveling thousands of miles across the Atlantic.

How Does He Feel After The Voyage?

He feels fantastic, despite the fact that he just finished battling across the Atlantic Ocean. He said it was a completely different type of fitness, and he is just happy to have completed the trip and that he is alive. He will be traveling with a friend to go surfing after this trip, but for the most part, he is feeling great. He also feels great for a completely different reason. It has to do with how many people he has helped. There were many people counting on him making it a crossed, and because of that, many people and children will receive the help that is in need of food and medical attention.

What Was His Primary Objective for Doing This?

Part of the reason for doing this was to show people that anything is possible. No matter what you aspire to do, you can achieve it. He was able to raise money for charities, help feed thousands of children and help kids that need certain types of operations. He has also worked with turtle rehabilitation, and that’s why his journey from Morocco to Antigua is so important. It follows the loggerhead turtle migration patterns, and he was actually able to see dolphins, whales, and many other aquatic creatures that would swim along with him out in the water.

Was He Ever Frightened During The Trip?

He stated that there were times when he was slightly nervous, but because of his persistence in the water throughout his life, he just eventually got into the flow of the sea. He actually felt at one with the water, and despite times where he believed there may have been sharks, they did not put him in any danger. He said the key was to be adaptive and flexible. It was how he was able to overcome any obstacles and keep a positive mental attitude.

What Are His Plans Afterwards?

Now that this is done, this may inspire many other people to make the same journey. It is a journey that you will definitely have to be in shape for. To imagine that he was able to paddle across the entire Atlantic Ocean is an amazing feat of physical endurance, not to mention mental endurance, especially at night when you could not see what was going on. 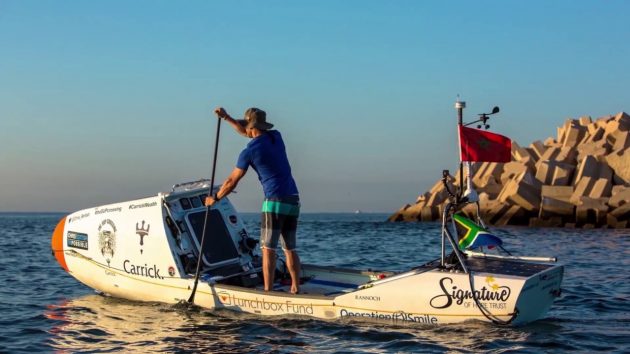 This is a story that should motivate anyone to think about their own situation and realize that what they are facing may not be that difficult. To imagine that someone could paddleboard several miles over the ocean is one thing, but to go across the entire Atlantic Ocean, on nothing but a paddleboard, this should show people that they really could strive to achieve anything.

This message is only visible to admins.

Error: An access token is required to request this resource.
Type: OAuthException
Solution: See here for how to solve this error